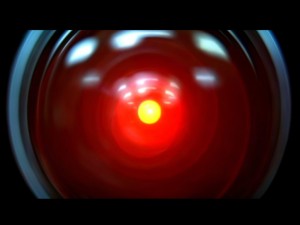 Only a year ago, robots taking jobs was a still in the realm of science fiction and the idea of a an intelligent machine was off the scale and just not going to happen.   How things of changed!

Even 6 months ago, robots taking jobs was sort-of happening, but really not something to worry about.  See my previous post.

Now the lid is off and automation is taking jobs at an alarming pace with no end in site.

A recent 60 minutes segment (see below for video) highlights the alarming rate of innovation and adoption of robots, the dire effects on employment, and the cause of the jobless recession.  This segment is a must see.

A jobless recovery may be the very least of the problems automation is creating.

Or a new robot that flips burgers.  Soon we won’t be saying, “He’s going to end up flipping burgers.” Because now, robots are taking even these ignobly esteemed jobs. Alpha machine from Momentum Machines can ‘cook’ 250 burgers per hour.  Momentum machines claims their burger flipping machine produces “gourmet quality burgers at fast food prices,”  since the cost savings in labour allows ‘restaurants’ to use higher quality ingredients, thereby producing a truly gourmet burger.

Though, I would take issue with calling a 100% machine-produce item ‘gourmet.’  I certainly wouldn’t call it ‘cooking,’  nor would I call an establishment using burger producing machines a ‘restaurant.’

Robot makers bravely claim robots aren’t taking jobs away, but it is hard to take those claims too seriously.  Technology is indeed taking what used to be middle class jobs.

Five years after the start of the Great Recession, the toll is terrifyingly clear: Millions of middle-class jobs have been lost in developed countries the world over.

And the situation is even worse than it appears.

Most of the jobs will never return, and millions more are likely to vanish as well, say experts who study the labor market. What’s more, these jobs aren’t just being lost to China and other developing countries, and they aren’t just factory work. Increasingly, jobs are disappearing in the service sector, home to two-thirds of all workers.

They’re being obliterated by technology.

Year after year, the software that runs computers and an array of other machines and devices becomes more sophisticated and powerful and capable of doing more efficiently tasks that humans have always done. For decades, science fiction warned of a future when we would be architects of our own obsolescence, replaced by our machines; an Associated Press analysis finds that the future has arrived.

“There’s no sector of the economy that’s going to get a pass,” says Martin Ford, who runs a software company and wrote “The Lights in the Tunnel,” a book predicting widespread job losses. “It’s everywhere.”

Experts warn that this “hollowing out” of the middle-class workforce is far from over. They predict the loss of millions more jobs as technology becomes even more sophisticated and reaches deeper into our lives.

The most vulnerable workers are doing repetitive tasks that programmers can write software for — an accountant checking a list of numbers, an office manager filing forms, a paralegal reviewing documents for key words to help in a case. As software becomes even more sophisticated, victims are expected to include those who juggle tasks, such as supervisors and managers — workers who thought they were protected by a college degree.

But that isn’t all.   What is hidden in the weeds is these technologies follow Moore’s law, where productivity doubles and costs are 50% lower, every 18 months.    So what we are seeing today is nothing compared to what is coming.   In 5 years, the technology being used today will not be twice as productive, it will be 16 times as productive.

Just in North America the effects are alarming and accelerating.   Europe is even worse off.  While they struggle to emerge from austerity, political upheaval, social unrest, moribund economies and crushing debt loads, even if all goes well and they manage to muddle through, a very doubtful proposition, that won’t solve the underlying unemployment problems caused by automation.

China and other low cost suppliers face a complex and uncertain future with the same automation unemployment issues, (burger flipping machines are very popular in China apparently) together with game-changers such as  3-D printing.

And what of the intelligent self-aware machine beloved of science fiction?  Even 6 months ago it was deemed too complex and nobody wanted to invest in such a thing and there was ‘no interest.’  Now, it’s not so clear.

Consider speech recognition, which 10 years ago was considered impossibly complex for even rudimentary voice commands.  Now Samsung has a robot vacuum cleaner that responds to voice commands.  Their top of the line model sells for $1200, but that won’t last for long.  The Japanese have developed a robot vacuum that will recognize voice commands in three languages and several dialects.    Moore’s law in action.

A self-driving car is a similar problem.  In 2004, it was considered such a difficult problem it could never be automated.

Fast forward less than 10 years, when Google and others have driverless cars driving automatically over hundreds of thousands of miles. Without one accident.  Oh, and those cars have now been on the road for several years, meaning they were introduced just a couple of years after the 2004 book by Harvard economists said it was basically impossible.

The future is unknowable, but one thing we know is that change sometimes comes fast.  Things that are unimaginable become reality in the space of only a few years.  Hat Tip Andrew Sullivan

Indeed, the future is unknowable.  Are we going to have self-aware intelligent machines?   I’d say we can count on it.