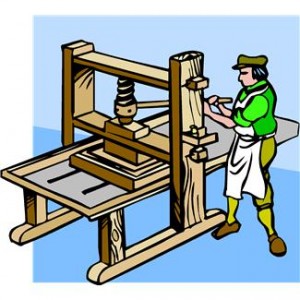 Time Warner is trying to sell its stable of ‘iconic’ magazines,  People, InStyle, and Real Simple, among others, while retaining Time, Sports Illustrated and Forbes.  Oh, but they would be spun off into a separate company for ‘tax purposes,’ which really means they lose money.

Readers Digest has filed for bankruptcy, for the second time in 4 years.

Playboy is on the ropes (still). Since 2000, the value of Playboy Enterprises Inc. has dropped from around $1 billion to $84 million in 2009.  Oh my!   Bad boy Hugh, now 84, and recently married to (another) busty blonde, Crystal Harris, (age 27) still owns, and refuses to relinquish, his 70% of common stock and is reduced to selling pieces from his extensive art collection and the manor next door.  Even the famous Playboy mansion may soon be on the auction block.  Poor Hugh!

The venerable Atlantic is reduced to selling full-page infomercials to Scientology, and editing out negative comments submitting in the `discussion`section of their website.  Until they were caught red-handed, severely damaging their up-scale brand, and made worse by the magazine’s top executive blustering and flailing about. Here is a company-wide memo leaked to watchdog Jim Romenesko.

McGraw-Hill has even bigger problems, unrelated to their publishing business, but with no less dire implications as owner of credit rating agency Standard and Poors.  S&P allegedly certified junk mortgages as AAA+ at a prodigious rate prior to the financial melt-down in 2008.  Now the US Justice department is suing for $1 Billion, and the State of California for $4 billion.  The State of New York has yet to file their own claim and other States are still investigating.   Not the sort of people you would want to trifle with.  McGraw Hill makes $800 million/year, from enormous holdings of education, publishing, financial services, media and broadcasting subsidiaries    Even if they settle for half, $2.5 billion is 4+ years profit plus legal fees.  That is profit on the whole group of companies, so if not completely pre-occupied and facing insolvency, they aren`t going to be blazing any new trails for some time.

Newsweek discontinued print publication at the end of 2012, and is now only available in digital format.

And at the same time, book publishing companies are entering defensive mergers, such as the recent Penguin and Random House merger.  Which, BTW, now means one company will now publish 25% of all English language books.   How long that will last is another matter.

Bertelsmann, owner of Random House, is famous for having more accountants than editors, which does not bode well for their much-vaunted ability to discover and nurture new talent. Which reminds me of a restaurant job I had in University.    The owner scolded me for putting too many chocolate sprinkles on a latte.  I pointed out to her that I thought the problem wasn`t the extra expense of chocolate sprinkles, but rather, the business had too few customers.  She became enraged, and I was fired not long after, and watched them go bankrupt.

While mulling over these news stories, I came across this article, 9 job titles changing the face of media publishing.  Here are few of the new jobs:

These new jobs, which are re-shaping the much larger media industry, all have one thing in common – Listening to the customer.  Analytics, Data, User Experience all look at what customers are doing, what they are reading, what they click on, and where they spend the most time.  Which, you sorta have to do, if, you know, you are running a business.

Which is probably why the `iconic` magazines are in such a bind.   In the bad old days, advertisers would blindly hand over cash for advertising, and without taking the trouble  to verify how effective the advertising was.  Now that has changed.  Everything is tracked and advertising that doesn`t perform is painfully obvious.

Book publishers face different challenges but no less fraught.  The `blockbuster business model` worked well as long as you could control everything, and you were the only game in town.   Nice work if you can get it!  Now, companies like, Createspace, Apple, Google and Amazon, are crashing the nice exclusive party, and authors can go directly to market – called disintermediation, a fancy word for eliminating the middle-person.  Kind of shakes up the dress code.

Where will it all end?   Ebooks are great and have their place in the marketplace.   Print books still out-sell ebooks by a huge margin.  APPs are great, as long as you don’t mind using them on your phone.  The big publishers clearly aren’t going away, but are in for a rough ride, and relentless pressure to transform themselves and slim down.  Printing huge quantities of books and trucking and warehousing are valuable services and profitable on a large scale.  That isn’t going to change.

Where blockbusters come from, who controls the process, and on what terms they are published, has changed.  All of which puts huge pressure on large publishing companies.  However, it is no longer necessary to have a blockbuster to be profitable, even very profitable.  Many many independent authors sell directly to their customers through Amazon, Apple et. all and make significant income, well above the average.  That is new and isn’t going away.

Magazines and newspapers are slimming down, and many are still profitable – they aren’t crazy profitable any more, which is kind of too bad, but they still make money.

Bookstores are transforming themselves into a different animal, by providing a pleasant environment to discover books, with new services like online sales, public readings by authors, writing workshops, events, on demand print machines.  Whether this will work is debatable.   Chapters is attempting to transform itself from a bookstore to a more general lifestyle store, selling candles and dish towels – a dubious venture.

And for authors, who, recall, actually create the content, times have never been better.   If you can create good quality content, and have some technical inclination, the world is your oyster.  Even without technical expertise, many many services will convert your book and assist you to sell your content, well, everywhere.   Here is a quick list of sales channels for independent authors:

In my next post I will detail do-it-yourself publishing.