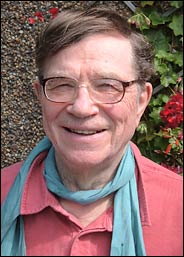 British writer and philosopher Colin Wilson and one of my favorite authors in my, umm,  formative years, passed over the weekend.  Back in those days, I was much given to exploring physic phenomena, mysticism and the unknown and Colin Wilson’s ideas and philosophy was, and is still, endlessly fascinating.  In addition to extensive works in philosophy, he wrote widely on true crime, mysticism and the paranormal. Wilson preferred calling his philosophy “new existentialism” or “phenomenological existentialism”.  Obituary on NY times.

Like his non-fiction work, much of Wilson’s fictional output from Ritual in the Dark (1960) onwards has concerned itself with the psychology of murder.  However, he has also written science fiction of a philosophical bent, including the Spider-World series.

On the verge of swallowing hydrocyanic acid, he had an insight: there were two Colin Wilsons, one an idiotic, self-pitying teenager and the other a thinking man, his real self.

The idiot, he realized, would kill them both.

“In that moment,” he wrote, “I glimpsed the marvelous, immense richness of reality, extending to distant horizons.”

Achieving such moments of optimistic insight has been his goal and subject matter ever since, through more than 100 books, from his first success, “The Outsider,” published in 1956, when he was declared a major existentialist thinker at 24, to the autobiography.

Indeed, the idiot will kill us all!  Wilson’s thesis is that, I may wake up on a rainy Monday morning, and feel down.  And not only that, everything that happens subsequently, will only serve to worsen my ‘down’ mood in a downward spiral.  Similarly, on Christmas morning, there is candy and presents and the smell of the Christmas tree, and everything that happens serves to uplift my mood.  So the trick is, catch yourself in the downward spiral and claw your way back up and turn it into an upward spiral.

This of course is nothing new and similar ideas are currently popularized by Abraham Hicks among others.  But it speaks to the very heart of things and enjoying life – which is of course the whole point, of well, everything.  If you aren’t happy, then you have to pull yourself out of that and enjoy your life.

And of course there is also something to be said for revelling in your own misery, which can be fun too.  But like the child who has spend all morning in the bath, and is now bored with all his toys, sooner or later you have to make a move, get up and do something. Which takes a titanic effort.

Wilson has spent much of his life researching how to achieve those moments of well-being that bring insight, what the American psychologist Abraham Maslow called “peak experiences.”

Those moments can come only through effort, concentration or focus, and refusing to lose one’s vital energies through pessimism.

“What it means basically is that you’re able to focus until you suddenly experience that sense that everything is good,” Mr. Wilson said. “We go around leaking energy in the same way that someone who has slashed their wrists would go around leaking blood.

“Once you can actually get over that and recognize that this is not necessary, suddenly you begin to see the possibility of achieving a state of mind, a kind of steady focus, which means that you see things as extremely good.” If harnessed by everyone, this could lead to the next step in human evolution, a kind of Superman.

The obvious criticism of this idea, which could be debated at length, and I have no suggestions or solution, is that this is a philosophical issue to help rich people, which we are compared to most of the world, feel better.  If, for example, you don’t have enough to eat, and live in a desert, then it is hard to see how taking the next step in human evolution is helpful or relevant.

Anyways, enough philosophising.   Here is a list of Colin Wilson books I have read and highly recommend: