Keep going guys – You are doing great! The GOP circles the drain. 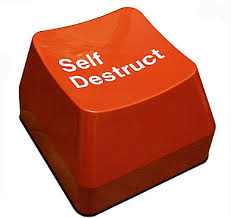 Just off their strategy meeting before the 2014 mid-term elections, and one year after publishing a post-mortem of their SECOND embarrassing defeat at the hands of the mean Mr. Obama, the RNC  is not what you might call getting their act together.

The election post-mortem report proudly declared they would “grow the Party and improve Republican campaigns” by appealing to African-Americans and Hispanic demographics, as well as women.  Well, things haven’t been going well, and what a week it has been.

Would-be congressional hopeful, Sen. Richard “Dick” Black, made the amazing claim that spousal rape shouldn’t be a crime, as well as other unbelievably offensive remarks about abortion, all of course delivered with a straight face.  “Dick” seemed genuinely surprised by the ensuing media firestorm.  Talking Points Memo Blog has published a shameful and hilarious History of GOP saying Crazy things about Women.

At the same time as “Dick” Black was holding forth on spousal rape, another old white guy, former presidential candidate Mike Huckabee was expounding his views on the role of public policy and women’s libido.  Of course, Repubs take the free market approach to women’s libido, and feel the best solution is for women to “control themselves.”  He further opined that the Dems, would take a Government regulation approach.  Hilarious!  Of course, Mike Huckabee is no stranger to wacky ideas.   During his joke presidential run, he talked at some length about his halcion college days in Arkansas.  Apparently in his crazy student days, he was so poor, he would catch squirrels and eat them.  Apparently crazy Mike and his buddies cooked squirrels in a popcorn popper, and get this, ate the entire squirrel including the brains.  Which is very bad.  Squirrels are known to be carriers of  Bovine spongiform encephalopathy, or could we say Mad Squirrel Disease (?) which is found in the brain tissue of squirrels.  So perhaps it isn’t so surprising to hear such wacky claims, after all. 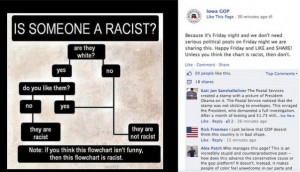 And then to top it off, on the final day of their strategy session, a contractor for the Iowa GOP posted a handy guide on how to tell if you are a racist or not!  Looking at the flow-chart, I think the social media contactor is NOT a racist, since he IS white, and DID think it was funny.  Chairperson A.J. Spiker of the Iowa Republican Party, who felt the posting was “in poor taste,” clearly IS a racist, since he IS white and did NOT think it was funny!