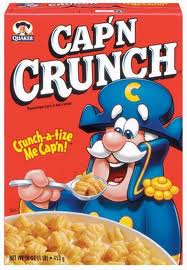 He set up his empty bowl and an exceptionally large soup spoon – so large that most European cultures would identify it as a serving spoon and most Asian one as a horticultural implement.  He obtains a stack of paper napkins, not the brown recycled ones that can’t be moistened even by immersion in water, but the flagrantly environmentally unsound type, brilliant white and cotton fluffy and desperately hygroscopic.

He goes to the fridge and gets the milk.  What Randy would like to see, ideally, is the milk so cold that when he reaches in and grabs it, he feels the flexible, squishy pod stiffen between his fingers as ice crystals spring in to existence, summoned out of nowhere simply by the disturbance of being squished.

The gold nuggets of Cap’n  Crunch pelt the bottom of the bowl with a sound like glass rods being snapped in half.  Tiny fragments spall away from their corners and ricochet around on the white porcelain surface.  World-class cereal-eating is a dance of compromises.  The giant heaping bowl of sodden cereal, awash in milk, is the mark of the novice.

Ideally one wants the bone-dry cereal nuggets and the cryogenic mild to enter the mouth with minimal contact and for the entire reaction between them to take place in the mouth.  Randy has worked out a set of mental blueprints for a special cereal-eating spoon that will have a tube so that you can spoon dry cereal up out of the bowl, hit a button with your thumb, and squirt milk into the bowl of the spoon even as you are introducing it into your mouth.  The next best thing is to work in small increments, putting only a small amount of Cap’n Crunch in your bowl at a time and eating it all up before it becomes a pit of loathsome slime, which, in the case of Cap’n Crunch, takes about thirty seconds.

At this point, he pours the mill with one hand while jamming the spoon with the other, not wanting to waste a single moment of the magical, golden time when cold milk and Cap’n Crunch are together but have not yet begun to pollute each other’s essential natures: two Platonic ideals separated by a boundary a molecule wide.  Where the flume of milk splashes over the spoon-handle, the polished stainless steel fogs with condensation.  Randy of course uses whole milk, because otherwise why bother?  Anything less is indistinguishable from water, and besides he thinks that the fat in whole mild acts as some kind of a buffer that retards the dissolution-into-slime process.  The giant spoon goes into his mouth before the milk in the bowl has even had time to seek its own level.  A few drips come off the bottom and are caught by his freshly washed goatee.  Randy sets the milk down, grabs a fluffy napkin, lifts it to his chin, and uses a pinching motion to sort of lift the drops of milk from his whiskers rather than smashing and smearing them down into the beard.  Meanwhile all his concentration is fixed on the interior of his mouth, which naturally he cannot see, but which he can imagine in three dimensions as if zooming through it in a virtual reality display.  Here is where a novice would lose his cool and simply chomp down.  A few of the nuggets would explode between his molars, but then his jaw would snap shut and drive all of the unshattered nuggets straight up into his palate where their armor of razor-sharp dextrose crystals would inflict massive collateral damage, turning the rest of the meal into a pain-hazed death march and rendering him Novocain-mute for days.

Randy has, over time, worked out a really fiendish Cap’n Crunch eating strategy that revolves around playing the nugget’s most deadly features against each other.  The nuggets themselves are pillow-shaped and vaguely striated to echo piratical treasure chests.  Now, with a flake-type of cereal, Randy’s strategy would never work.  But then Cap’n Crunch is a flake form would be suicidal madness;  it would last about as long, when immersed in milk, as snowflakes sifting down into a deep fryer.  No, the cereal engineers at General Mills had to find a shape that would minimize surface area, and, as some sort of compromise between the sphere that is dictated by Euclidean geometry and whatever sunken-treasure-related shapes that the cereal-aestheticians were probably clamoring for, they came up with this hard-to-pin-down striated pillow formation.  The important things, for Randy’s purposes, is that the individual pieces of Cap’n Crunch are, to a very rough approximations, shaped kind of like molars.  The strategy, then is to make the Cap’n Crunch chew itself by grinding the nuggets together in the center of the oral cavity, like stones in a lapidary tumbler.  Like advanced ballroom dancing, verbal explanations (or for that matter watching videotapes) only goes so far and then  your body just has to learn the moves.

From – Cryptonomicon by Neal Stephenson one of my top 3 favorite books.