I must be going to the wrong bookstores 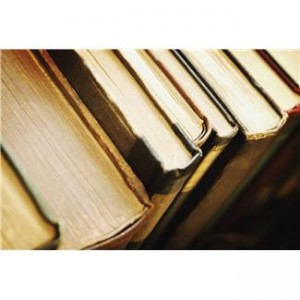 In the dream, he is in a bookshop.  It is a dark, filthy place, with a low ceiling and a drooping staircase that leads up to a small attic.  The shelves bend their backs under the weight of dusty volumes   A heady smell of incense from the back room mingles with a whiff of dust and mould in the air.

His pulse quickens, and he reaches for a small volume in curly, golden letters.  He loves the stories in his dreams, although he can never quite remember them when he wakes up.  He opens the book and starts reading.

The cannon ball man never loved her, even though he told her so many times.  His only true love was flying, that sensation of being blasted out of the mouth of the great iron thing that his grandfather cast out of metal that was said to come from a rock that fell from the sky.  he wanted a wife like a thing he should have, another tool to keep the great mechanism he and the cannon formed together in working order, but love was the wrong word for it-

Matjek blinks.  It’s not the right story.  It does not lead to the thief.

He jumps when someone coughs behind him and he slams the book shut.  If he turns around, he will see the lanky shopkeeper sitting behind the counter, looking at him disapprovingly, eyes wild, grey chest hairs peeking out from the buttonhole of a stained shirt, unshaven face full of malice.  Then he will wake up.

Matjek shakes his head.  Tonight, he is not just a dreamer.  He is on a mission.  Carefully, he replaces the book in the shelf and starts walking up the stairs.

The wood groans under his weight with each step.  He feels heavy   The handrail suddenly feels soft in his grip.  If he is not careful, he will sink into another, deeper dream.  But then he sees it: a flash of blue amongst the grey volumes, up in the corner self ahead, just where the stairway ends.

Below, the shopkeeper coughs again.

Matjek reaches for the book, standing up on his toes and pulling at the blue binding with his fingertips.  The book falls, and a cascade of others comes toppling down with it.  Dust stings his eyes and throat.  He starts coughing.

‘What are you doing up there, boy?’ says a creaking voice, followed by sudden, shuffling steps, and the groaning of floorboards.

Matjek gets down on his knees, tosses aside books on flea circuses and singing mice, and uncovers the blue volume. There are tears and dents on the cover, with brown paper peeking out, but the silver cover design with its minarets, stars and moon is still bright.

Something comes up the stairs, something that smells of incense and dust, not the shopkeeper anymore but something far worse, something papery and whispering and old-

Matjek fixes his eyes on the book and flings it open.  The words leap out at him, black insects moving on the yellowed page.

Among the histories of past peoples a story is told that in the old days in the islands of India and China there was a Sasanian king, a master of armies, guards, servants and retainers, who had two sons, an elder and a younger-

The words swirl. The paper and the letters bulge out, form the shape of a hand, fingers of black and white, reaching out from the book.

The dust thing coughs and whispers, and something brushes Matjek’s shoulder, tickling sharply.  He grabs the hand as hard as he can.  The hand pulls him in, into the suddenly vast sea of language in front of him.  The words roll over him like-

-waves, a gentle teasing pull and push of cold foam around his bare feet.  A warm evening sun above a beach of white sand like a smile.

‘For awhile there, I thought you weren’t going to make it,’ the thief says.  He hold Matjek’s hand in a warm, tight grip, a light man in shorts and a white shirt, eyes hidden behind sunglasses, blue like the book of nights. 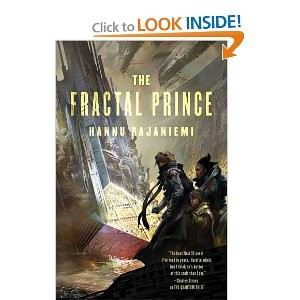 From The Fractal Prince by Hannu Rajaniemi