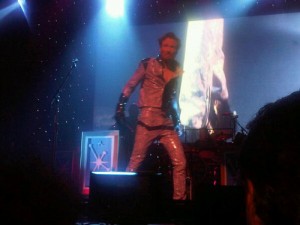 Conan O’Brien, who I don’t really care for, actually had something interesting to say at a Commencement speech to Dartmouth Grads:

Fogbound, with no compass, and adrift, I started trying things. I grew a strange, cinnamon beard. I dove into the world of social media. I started tweeting my comedy. I threw together a national tour. I played the guitar. I did stand-up, wore a skin-tight blue leather suit, recorded an album, made a documentary, and frightened my friends and family. Ultimately, I abandoned all preconceived perceptions of my career path and stature and took a job on basic cable with a network most famous for showing reruns, along with sitcoms created by a tall, black man who dresses like an old, black woman. I did a lot of silly, unconventional, spontaneous and seemingly irrational things and guess what: with the exception of the blue leather suit, it was the most satisfying and fascinating year of my professional life. To this day I still don’t understand exactly what happened, but I have never had more fun, been more challenged—and this is important—had more conviction about what I was doing.